I've been meaning to write for a while now, I was surprised to see how long it has been since I last wrote.
I have had a bad year health wise, I have deteriorated considerably this year, started with the flu so January went, a couple of bad chest infections all took there toll, as a consequence I am very limited as to what I can do.
One of the things I've had to do is stop painting, so my studio is now a dining room.
The NHS has been superb as has Jane and Debbie. I have been referred to Dorothy House as I hear they are good at helping deal with my sort of problems.
Posted by Philip Ledbury No comments: 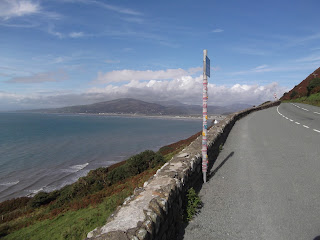 Had a wonderful week in West Wales, spectacular scenery, good food and plenty of rest and the weather was amazing, Thanks to Penlan cottages for superb accommodation. The only drawback was the week flew by.
Posted by Philip Ledbury No comments:

Well the  Olympics are nearly over, well done team GB. I saw the hype before hand and then it's the opening ceremony. I must admit that I have enjoyed seeing the whole spectacle. I know it's one of my favourite subjects but to spend what Brazil has on the Olympics when they struggle to provide basic amenities for their population is appalling, the IOC should also think about the cost to a host nation.
Well I was hoping that the 14 days of intravenous antibiotics would sort me out, unfortunately that's not happened, it helped but it did not cure it.
If anybody has an idea of somewhere I could hang some pictures to sell, it could be pub,shop or anywhere please let me know.

Lots of love
Philip
Posted by Philip Ledbury No comments:

I decided to revamp my website, one of the things I wanted to do was change my blogs name form Dead man ranting to something else but unfortunately I'm stuck for a name, I will eventually get one.
I hope to be 67 this year and one of the things from watching too much news is that the world is worse than I can ever remember it, there are more refugees now than there were in world war 2, We have them camped on the borders of Europe in appalling conditions. I am against the bombing of Syria as I thought the billions spent could of helped refugees.

The violence in the world seems to be every where, we are waiting it appears for it to happen here according to the Police.
Wars seem to be in nearly every continent, it is politicians who make war, it is the populace who suffer them.
I have always believed that anyone can be a politician you don't need to be bright as the majority of them prove, we've had one who lied to take us into a war, and one who managed to take us out of Europe, still it could be worse we could have Trump and Clinton.

I do watch a lot of news and I have come to the conclusion that most of the news channels are poor to rubbish, Poor is how I rate the BBC, I think that the license should be abolished as I am fed up with the adverts for there own programmes and the quality of content, to many times it looks like there filling time. Today they discovered a report about the drop in house buying in our major cities, they wheeled out the talking heads who sprouted on. I thought anybody would know why this was but they are like our MP's not a clue about our world. We all know who the majority of staff at the BBC voted and it obviously wasn't labour.
Rubbish is Sky news, how can you take news seriously when for instance you've been watching a piece of news when the next thing you see is Gala bingo or Skybet,
Posted by Philip Ledbury No comments:

Just finished a 14 day course of antibiotics, 5 days in RUH and 9 days as an out patient in Ambulatory care in Frome hospital. I will be back, the staff were superb, a credit to the hospital and the NHS
Posted by Philip Ledbury No comments:

I have half a dozen pictures in the Woolpack in Sutton Veny, the food there is superb